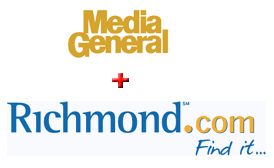 And the backlash on the internet has been fierce so far.  For a sample of the general opinion, take a look at the comments on the very same article also released on Richmond.com.

It's a big move both for Media General expanding their influence online, and for Richmond.com being taken under the wing of a media giant.  Let's hope that the worst fears of the public don't become reality, and maybe the combination of the two businesses will see good results for everyone.

It is unfortunate to see an independent news source get gobbled up by the majority player in the area, though.

(for more updates, here is what people are saying about the merger on Twitter)