Permanent makeup? You may be raising an eyebrow, but that is exactly where this story starts. 4 years ago, Ashley Meggie decided to get permanent makeup eyebrows — that is, a tattoo that mimics eyebrows. With alopecia, she had been drawing on her eyebrows for several years but had only considered permanent makeup when a Youtube beauty guru recorded herself getting them done. 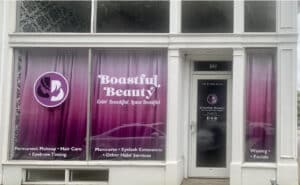 Tattoos are viewed negatively in the Muslim community, so prior to her appointment, Ashley visited the Islamic Center of Virginia to get permission. They officially ruled it was permissible for her (and others) to receive permanent eyebrows as a tattoo, as one is allowed to do what is necessary to achieve a level of “normalcy.” With a business plan developed, Ashley had been looking for a downtown location for Boastful Beauty for a few months with no success. On a visit to see a vacant building on East Grace Street she met Nathan Hughes by chance. After peering into a building curiously, Nathan stepped out to ask if she needed assistance, and their working relationship began right then, when after hearing about her vision, Nathan took her immediately to see a unit off of 5th and East Main Street.

After meeting Nathan, Ashley did some more research. “As a Muslim business, I really liked that he had a lot of ties in the religious community. He’s very involved with helping churches and community based programs find buildings.”

“East Main is definitely a major road. It’s just as synonymous as Broad Street to me. I couldn’t ask for a better location, and it’s a corner lot. You can see my business from two angles.”

Boastful Beauty is Virginia’s first and only Muslim beauty salon. There are only a few in the country, including California, New Jersey, and Washington, D.C. People travel far and wide to visit, from Fredericksburg and Stafford to as far as Philadelphia.

“I didn’t realize I was doing a big thing, I went viral when I shared on Facebook. I had over 6,000 friends request in less than 24 hours. The Muslim community went crazy!” Boastful Beauty also offers services for Muslim women like henna, hair wax/dying, press on nails instead of acrylics. But she stresses that all are welcome. Of the five on staff, two are Muslim, and the other 3 are from different backgrounds and races. “I want everyone to feel welcome here.” Everyone is represented. “When you look at our logo, you see diversity. All women are welcome to come to our salon.”

At only 25, Ashley took her vision and made it a reality. In the future she hopes to branch to Short Pump and offer more medi-spa procedures such as chemical peels, botox, and lymphatic drainage. While managing her new business, she’s also back in school and writing up a curriculum to found Boastful Academy, where she can train others to become professional permanent makeup artists.

“Anytime I called and asked for help, they had so many resources to share with me. I know they’ll represent me in the future when I’m ready to grow,” she says.